I am a Creative Specialist in Graphic Communication, driven by the need to make a positive social impact.

I believe that by listening to, and amplifying unheard voices, using a process of curiosity, innovation and research I can effect lasting change. I aim to spark and sustain change through an active process of collaboration and experimentation.

My practice is rooted in a conscious designMoss Bros Eco Suit
Creative Direction methodology, always prioritising socially responsible practices over everything else.

Brixton is known worldwide and the South London neighbourhood owes its reputation to the arrival of West Indian migrants, which began in the forties and fifties. This generation, who later became known as the Windrush generation, transformed the local area, developing vibrant markets and community spaces which catered to the Caribbean and other diaspora communities in Brixton.

Since the 1980s, it has made headlines with several uprisings. These were a civil rights reaction against inequality and the sustained racist mistreatment of local people by the police and other local authorities.

Today, that inequality is furthered by gentrification, erasing Brixton’s cultural history. As property prices soar, it is actively pricing out the people and communities that have lived in the area for decades.

As a resident of Brixton I have seen my home change over the years and felt moved to act to preserve the place I call home. I decided to join forces with a group of neighbours all united to stop the eviction of local businesses and communities. This is how the anti-gentrification action group, Save Nour was formed.

We now use our skills to stop the building of other developments that contribute to displacement. Save Nour is on a mission to support our local community and to tell the authentic stories of the people of Brixton.

How We Won: The Customers Who Saved Their Local Market — Novara Media

Since August 2020, we’ve been battling against the development of Hondo’s ‘Taylor Tower’, an enormous 20 storey office tower which will boost gentrification, pushing prices up and displacing residents and traders. Our campaign is called #FightTheTower.

My contribution to Save Nour has been multifaceted, executing creative campaigns that can further the cause, while applying my skills in research, design and communication at the service of my community. 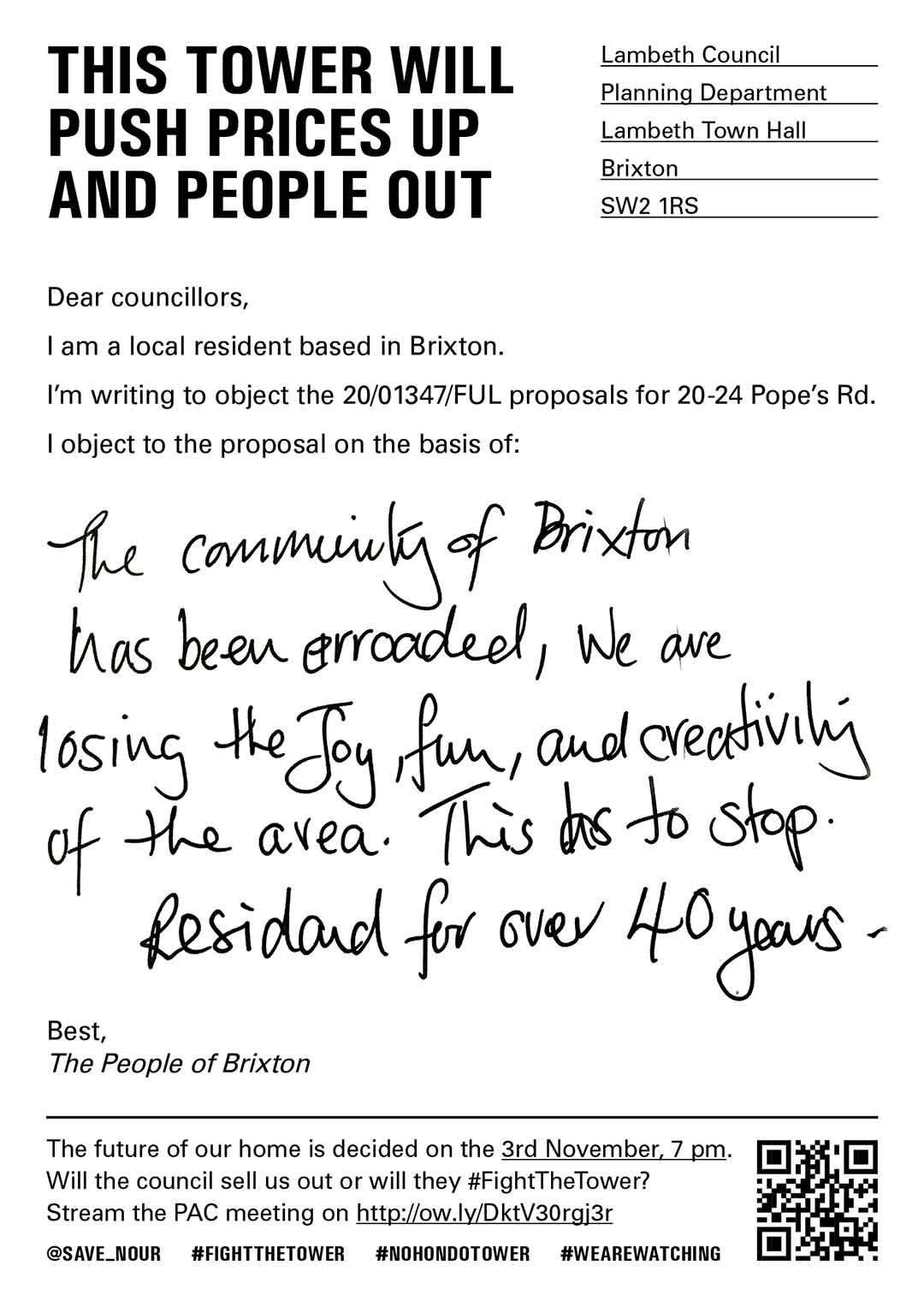 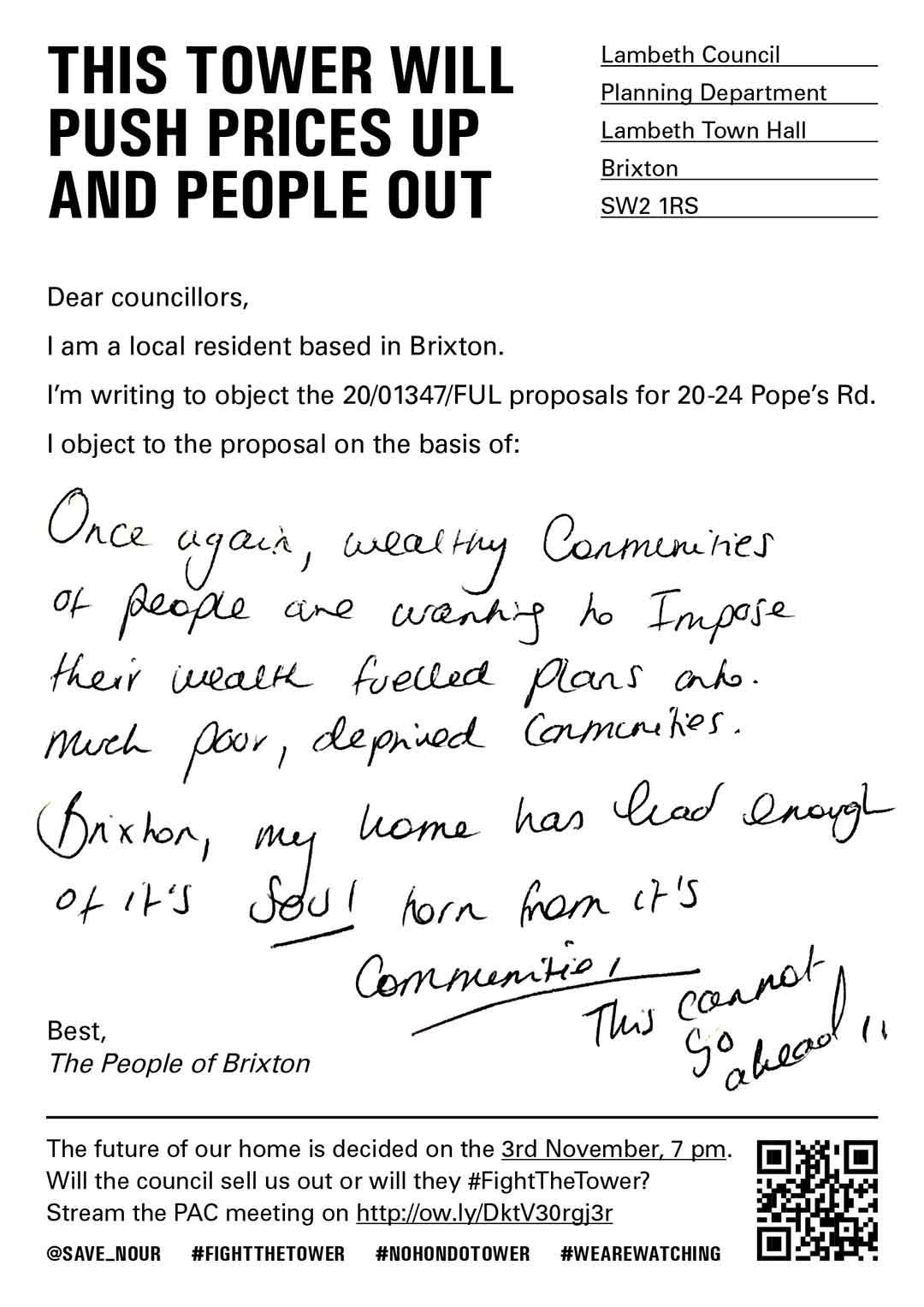 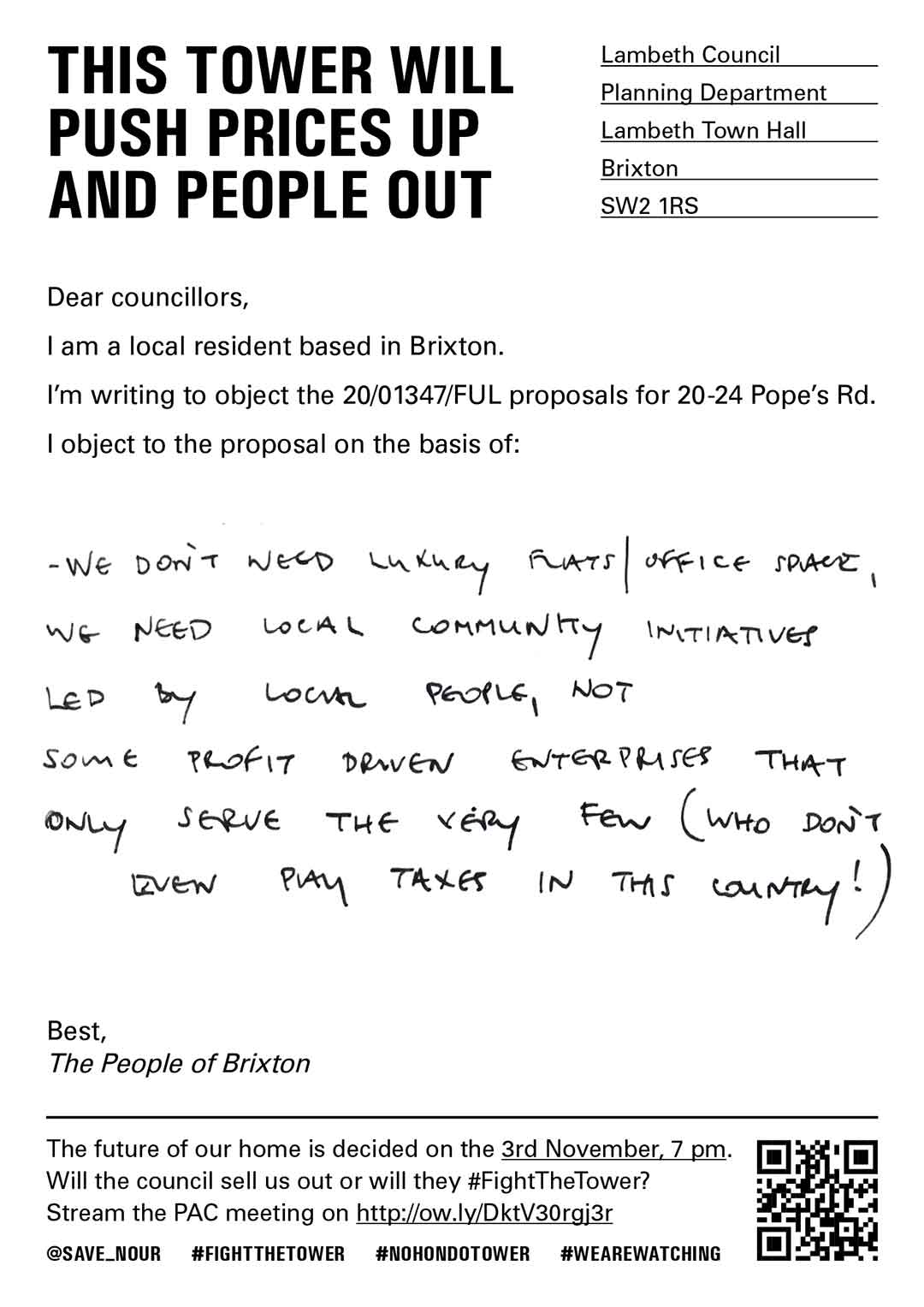 To encourage active conversations within the affected community I designed printed postcards as a tool for the people of the area to have their voices heard. 1404 postcards were sent directly to the Mayor of London and the official Planning Team to create a direct line of communication between those affected and the Government.

‘’It will completely ruin Brixton’s community.”

Join us on Pope’s road today and add your view to @MayorofLondon!#FightTheTower pic.twitter.com/ioubRMGvsa

“Brixton is heart of community for many people. An office block would be completely incompatible with the spirit of the area.”
A—, Brixton resident.#FightTheTower pic.twitter.com/9fvjEThio8

To create a multi-channel campaign social media was crucial, across platforms, the Save Nour accounts currently have more than 20k followers. During the campaign these channels were used to employ radical tactics that resulted in viral reactions, all to support and spread the core messages of the cause.

In order to activate change, we implemented Communication Design methods in different forms, inviting the community to actively engage. We used live streams of the Planning Applications Committee meetings on screens in the streets of Brixton. This meant that everyone could be a part of the journey, allowing them to personally hold the Council accountable.

Another communication method we employed was to create high-impact posters and flyers designed to be posted around the local area. This was to ensure that residents who would not see the digital content, due to a lack of access to the internet or technical ability would still be able to engage with the campaign.